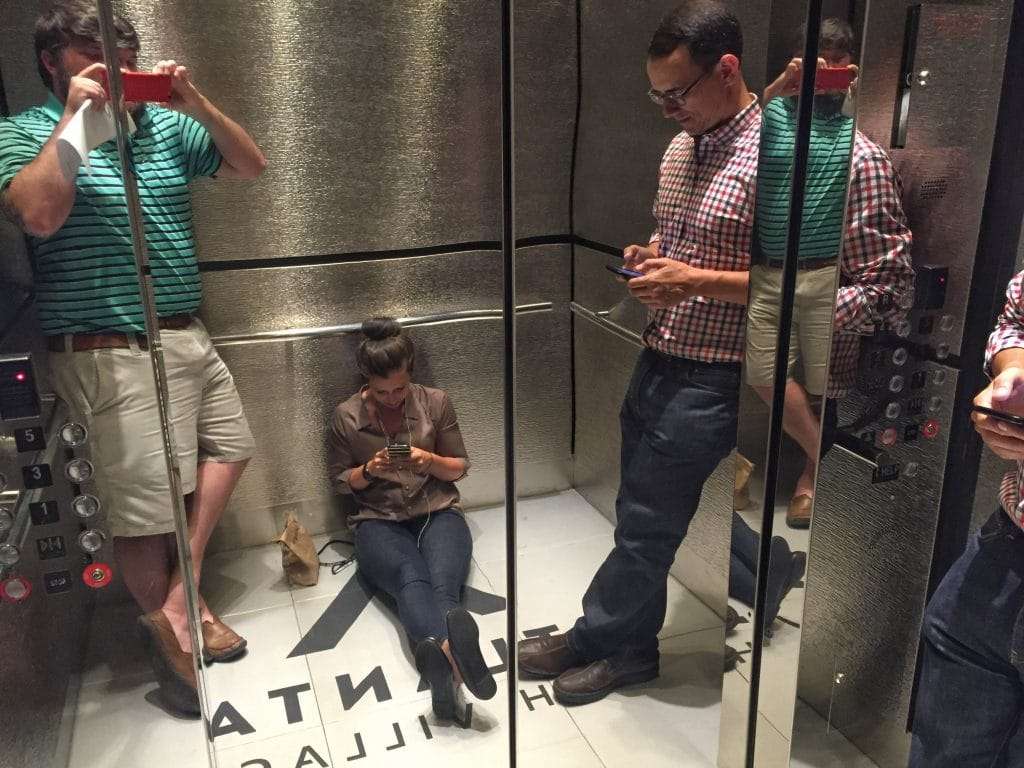 A Day in the Life of Team Acuity

A Day in the Life of Team Acuity

New jobs or exploring new positions can be tricky because you don’t know what the corporate culture really will be. Tech startups advertise a lot of perks but it’s hard to distinguish the truth. Have you ever wondered what’d be like to work with the Acuity team? We thought we’d share a glimpse into our team, culture and terrifying secrets all through the eyes of one of our newest team members.

Meet Travis Highfield. He’s been with our team roughly three months now and we’ve asked him to share some insights on not only joining the infamous startup society, but Acuity specifically. Let’s see what happened:

Earlier this month, I spent nearly two hours stuck in an elevator with my new boss, Acuity’s CEO Kenji Kuramoto. We tempted fate during a nasty thunderstorm and lost.

The lights flickered in Atlanta Tech Village right before we boarded the elevator. As Kenji was mid-sentence in a story about getting stuck once before under similar circumstances, we suddenly came to a crashing halt. We spent the next hour and a half cracking jokes about strengthening our “elevator pitches” and talking about Augusta, GA, my hometown.

Kenji reminisced about his time helping at the Augusta National Golf Club, where he handled their books. We traded stories about experiences at the Masters Tournament and had a few laughs. From January 2013 until this May, I worked at The Augusta Chronicle, one of the oldest newspapers in the country. I started as a sports clerk and worked my way to being a reporter. It was a fulfilling job; I did everything from appearing on the Nancy Grace Show to interviewing Donald Trump one-on-one, but I felt like there was something more that I was missing out on. I had spent nearly my entire life in Augusta and I wanted to try something new, but it was going to take a special opportunity to pull me away from a career like that.

Thankfully, Acuity is a special place.

Spending time in the elevator with Kenji allowed me to reflect on my journey. Speaking with him just felt natural. It was as if I was talking to a friend and not a boss (something I had missed up to this point in my career). When the conversation shifted to my time as a reporter, my thoughts drifted to the differences in work culture from the news industry to the tech startup realm.

Little things immediately came to mind like casual attire, free beer and nap rooms that just make working at Acuity so much sweeter – but it’s the big things that make the company an all around great fit for me.

Things like maintaining a dialogue with employees and having a strong sense of direction. I’m entering my third month with the sales team and I already feel like I’ve been here forever. I know how Acuity started and why, I know where we stand and where Kenji and Matthew want to take us. But more than that, I know what my role is in helping to achieve the goals of the team.

When I started at Acuity, I expected to walk into the Sales Development Representative and treat it as a job. Punch in at 9 a.m. and punch out at 5 p.m. Keep your head down and keep to yourself. The same kind of work I did as a busboy and a line cook. What I enjoyed most about being a journalist was the general freedom I was given. I could pick my own adventure every week as long as the work got done. It was fulfilling and challenged my creativity.

I had my doubts when I started (as every new employee does), but I’m happy to report that the work at Acuity is as fulfilling as I’d hoped it would be. The biggest success I’ve felt thus far is speaking to an entrepreneur who was down on their luck because his books fell so far behind, and I knew that I had a solution that would give him peace of mind. I can still choose my own adventures, prospecting the world one city at a time.

The best part is that after working hard, I get to party even harder with my coworkers.

Keep in mind that I spent several years as the youngest person in the newsroom. Having coworkers near my age is a life-changer, especially with me being new to Atlanta. We grab drinks together, watch sports, share team lunches on the rooftop of ATV, and then tear it up on karaoke night at Midtown Tavern. Just this past weekend I grabbed a burger at The Vortex with three of my colleagues. They’re not so much coworkers as they are my friends that I happen to work with.

It was because of my new friends that the transition from news to sales was an easy one. I spent the whole first week absorbing information from my direct supervisor, Whitney, and made minor adjustments along the way with the rest of the Sales Development Representatives by my side. After being drilled on cold calls, they challenged me to find prospects in a variety of new ways. Throughout it all, the team never talked down to me. They never acted like I wasted their time. They answered each question with grace and wanted me to succeed.

They all had their own ways of showing it though. For example, Dedra wrote me an encouraging note, one that is still taped to my computer monitor today. Brian, one of the more competitive people in the room, used playful trash talk to ignite my fire to do even better. They encouraged each other, too. We celebrated workiversaries for Tyler and Ma-Keba, who have been with the company for more than a year. Random potluck parties are typical for our team, and it’s normal for us to bust out the occasional bottle of champagne for some early morning mimosas.

Simply put: We have fun AND the work still gets done.

Being that Acuity is still a younger company, it’s clear to me that Kenji and Matthew are still trying to feel out what works and what doesn’t. From an employee’s perspective, that’s exciting. It means if we feel like we’re spinning wheels on something, say a prospecting technique, that processes could change in an instant rather than gradually over time. All that’s required is a consensus among the Sales team and boom – done – we have a new process in place. Being a versatile company is what will set us apart from the competition.

Our company values that same kind of versatility in its employees. We seek out individuals with a strong work ethic and reward those who put in the time to reach individual and team goals. It’s important to have fun while you’re reaching those goals too, to know you are at the right company for you. I think I found my perfect fit at Acuity.