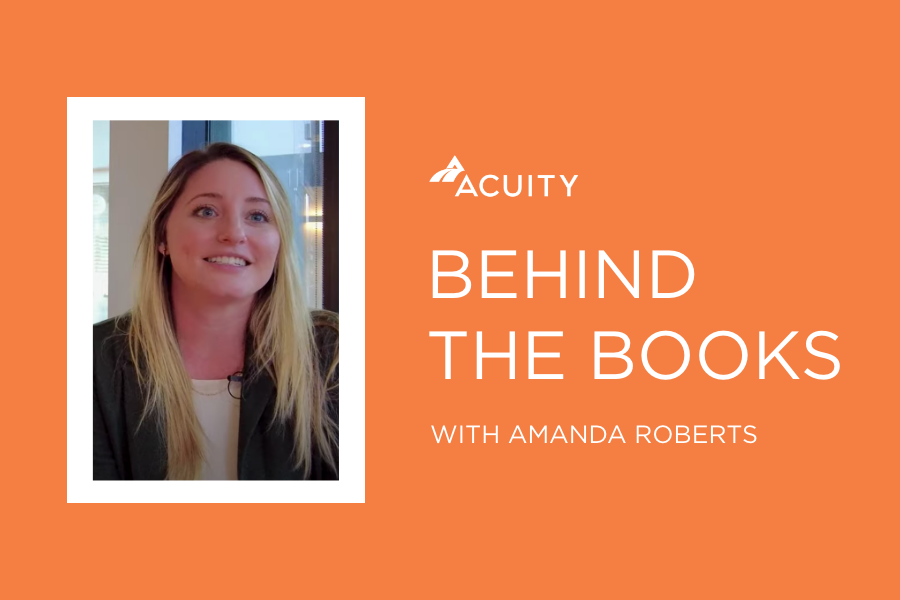 Behind The Book: Amanda Roberts

By Matthew MayOctober 18, 2021No Comments
Behind the Books

Behind The Book: Amanda Roberts

This post is part of our Behind the Books series, where we introduce you to the incredibly talented and hardworking people that make up the Acuity team. We’re excited for you to get to know them.

In this part of the series, Matthew May interviews Amanda Roberts, who has been a controller with us at Acuity for more than five years now. To watch the full interview, check out the video at the bottom of this post.

How did you get into accounting?

Well, I was really good at numbers, and so it just happened through some classes I enjoyed. I went into college actually as a psychology major. I didn’t know what I wanted to do, and there was a great program offered at the school I was at where I could get my bachelor’s and master’s in five years. And so, I just thought that was a really logical career to get into.

What was your first job?

My first job out of college was at PricewaterhouseCoopers – PwC. I was in risk assurance, which was a kinda cool job doing internal controls, audits, and traveling a ton. And so that was really great for my first few years outside of school, just getting to see a lot of things and work in a lot of industries.

Then, I moved to the private sector and did some oil and gas accounting. And then, my job before here was bucket trucks, which is kind of an interesting field, bucket trucks. I worked at a company called Altec, and they make most of the bucket trucks you see.

Tell us about your family.

My daughter’s great. She turned six on Monday. She started kindergarten this year. So, you know, she’s big! She’s a big kid now. You met her when she was just about three, and I think she still remembers you. And your daughter, because she loved your daughter!

She’s a little perfectionist. She wants to do everything right. She’s just like the sweetest kid ever. Very, very rule following – she takes after me because I don’t ever want to break the rules and get in trouble.

Then her little brother, who is three, is the opposite. He’s like, if there’s a rule, it’s made to be broken. The story about my son – we adopted him last year. We adopted him from foster care. So, we have had him in our family for about a year and a half now, almost two years, so many good things I can say about him.

How can you be a mom, work and adopt a child? How did that work?

Acuity – that’s the reason. If I didn’t work here, I mean, one of those three wouldn’t be the case. And the funnest part of that is the pandemic hit, like a month after he moved into our house. And so, this is great – no school!

Who is your favorite client that you’ve ever had at Acuity?

Shapiro Zwanetz & Associates. I think that the reason they’re my favorite is because they’re in a really unique industry. They’re the only client I have that’s in the legal field, and so all of that was really new to me. I learned a lot about trust accounting and all the things that go into that field, which I told you, I had originally wanted to be a psychology major. And so, I’m fascinated by things that people do. They’re defense lawyers and defense attorneys.

So, I just really love the work. It’s very different and very unique and very interesting. Some of the things people will do. It’s very interesting, but the people that I work with there are the kindest clients. I mean, they’re so complimentary. I just love every interaction I have with them. They’re great.

At Acuity, it doesn’t have to be a suit and ties zipped up, everybody’s super professional. Like you’re funny, you make jokes. I feel like we all really get to know each other. And we don’t put on this front that you might see in a lot of careers. In that vein, I get to be professional while still getting to be an individual and be myself, and I don’t feel like I have to hide that.

I love it. It’s so great. Every time I come to AcuityCon, too, I just remember because we don’t get to see each other very much. Which, to be honest, is great because that means that I have a lot of autonomy in my job. Nobody is breathing down my neck, making sure I’m in my seat from 8-5, so I get to raise my family. That’s how I had time to foster and adopt and pursue that because it’s really near and dear to my heart.

I’m so grateful because I get to have a life outside of being a mom while still getting to be a very present mom. And I truly just don’t think I could have found a better balance than I have found at Acuity. I’m going to stay here forever, until y’all kick me out the door.

Sammy Siddique 0
Behind the BooksTax
November 17, 2020

Meet Our Team of Tax Experts and Customer Success Advocates