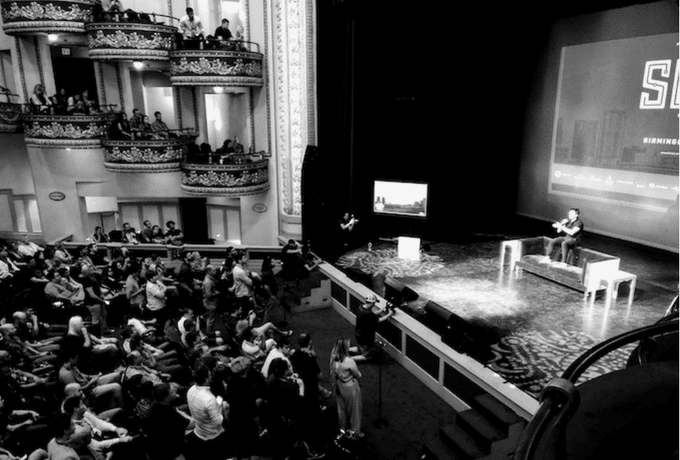 Last week, we had the awesome opportunity to participate in the Southeast’s preeminent tech festival, AKA, Sloss Tech 2017. Here’s David Averyt, Managing Director at Acuity Birmingham, with a behind-the-scenes look at the event.

Disclaimer: I love Birmingham. I’ve lived downtown for over decade, and it doesn’t take a conference or speaker to get me excited about my city. However, Sloss Tech is a bit of a different story. After all, this annual festival is helping to bring community, innovation and inspiration to my beloved city.

Stories were the story of Sloss Tech 2017. Birmingham can and should be proud of many of them. But a secondary theme emerged, too. With all the flash and hype associated with tech, it was good to hear the unvarnished truth: business is hard work, know your numbers, and fundamentals are, well, fundamental.

For the Birminghamians who missed the sold-out event (and for the curious or otherwise located), here’s a recap of the highlights:

Will Pearson, of Mental Floss and Part-Time Genius podcast, kicked off the day with a talk about engaging with stories. Even though the trend in digital content is ever-“bittier” (i.e., shorter), podcasting is growing on long-form content. The key takeaway? Whatever content you’re producing – focus on value first and click-throughs second. Engagement demands intrinsic value.

Mayor William Bell delivered the expected rah-rah Birmingham message. His administration, however, has backed up the rhetoric with support of the tech community, particularly Innovation Depot. In a recorded message, Devon Laney, Innovation Depot, pointed to healthcare, fintech, and tech-enabled services as tech trends to watch in Birmingham.

Dr. Julian Maha, Kulture City, challenged the non-profit sector to think like tech. If your social good is worth sharing, growth-hack it. To do that, dream big, build a foundation of good people and low overhead, scale, and be willing to innovate the mission statement (i.e., pivot).

Tiki Barber, Thuzio, continued the theme of story. Influencers have influence because of their personal brands, i.e., their stories. But don’t make the mistake of thinking that you need (or have to be) an A-list influencer. Seek an influencer who can add authentic trust to your service or product with the greatest ROI for your budget.

Bill Smith, Shipt, wanted to talk business. His story is impressive: in the past year, Shipt completed the largest VC raise in Alabama history at $200m. Yet entrepreneurs, Bill says, must make money, not just raise it. The best way to raise seed money? Get going. Then, let your success drive the conversation. Brendan Wales, whose VC firm invested in Shipt, echoed Bill. Not everyone needs to raise VC; bootstrap as much as possible.

Cliff Sims, Yellowhammer News, drew analogies from the 2016 presidential campaign. Tech and data are driving elections, but they must be used for more than grabbing attention. Engagement elicits a response. Regarding his current role at the White House Office of American Innovation, he says that the Trump administration recognizes that innovation comes from the private sector and that government should get out of the way.

Elizabeth Pharo, Momentum Telecom, told the story of inheriting two companies upon her father’s death. Immediately, she partnered with a finance guy. Together, they turned Momentum from -$7m EBITDA to +$20m. “I was tech,” she said, but “you have to read financial statements; you have to know the numbers.”

The best nugget from Casey Neistat’s presentation came during Q&A. When an audience member commented that she thought more corporate marketing dollars should be used to help those in need (like Casey did with the marketing budget for The Secret Life of Walter Mitty), Casey stopped her cold: That’s ridiculous. What worked for me probably won’t work for you. You are a marketer. You drive revenue. Unless you demonstrate an ROI, you won’t be in business very long.

Tech, it’s nice to have you in Birmingham.

The 11 ½ Best Books For Entrepreneurs