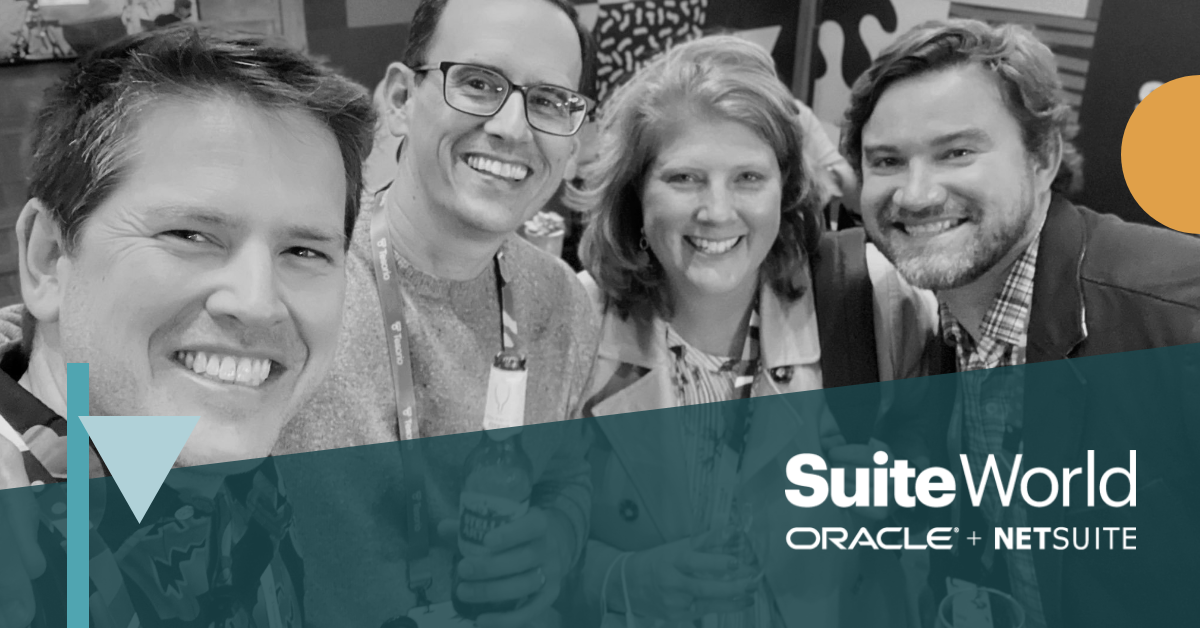 By Kenji KuramotoNovember 2, 2021 No Comments

Oct. 18 through Oct. 21 marked conference number 10 for SuiteWorld! Around 2,000 people came out to Las Vegas for the event, which in past years, has attracted upwards of 6,000 attendees.

However, after almost two years apart, it was an exciting time to gather together again – much like other industry conferences, SuiteWorld was cancelled in 2020 due to COVID-19.

Plus, it was Acuity’s first time being there! CEO Kenji Kuramoto and COO Lisa Gilreath flew out to Vegas to check out what it’s all about.

SuiteWorld was a change of pace, compared to other conferences that Acuity frequents. There were fewer accountants there, and many developers who implement NetSuite as well as solution providers.

But since NetSuite is geared toward a little bit of a larger-sized company, it’s naturally a different make up than conferences for some of our other partners, like Gusto and Xero.

In addition to our partnership with NetSuite, a few of Acuity’s other partners were in attendance, too, including Bill.com, Expensify, and Brex.

Some of our other friends in the industry were there, too.

We got to catch up with fellow Atlantan Trevor McCandless, CPA, CEO of Fusion CPA, as well as our friends and hosts of Cloud Accounting Podcast,  Blake Oliver, CPA, and David Leary.

For other companies that have never been and are considering attending in the future, it’s organized like your typical conference.

SuiteWorld began on Monday with a partner summit and ran through Thursday. Sessions were offered throughout each day, and a trade show was running throughout the duration of the conference. And of course, each evening was set aside for socialization.

Kevin O’Leary from Shark Tank delivered the keynote, and he did an exceptional job. And it went something like this…

Obviously as one of the sharks, he has invested in several different companies over the years, but many failed within the last several months due to COVID-19.

O’Leary’s keynote address focused on a couple of different businesses that he’d invested in on Shark Tank (one of them being NetSuite!) that have survived the pandemic. He highlighted some of the things they did and didn’t do to differentiate themselves and continue to be successful.

(He even showed videos from NetSuite on Shark Tank, which was pretty cool.)

“Data is the new oil” and customer data from building a direct to consumer business is becoming extremely valuable pic.twitter.com/abZrMvhnOD

Highlighted in Kevin O’Leary’s keynote, as well as throughout the conference, was a former Acuity client: Lovepop Cards.

And if you’re unfamiliar with Lovepop, they make some of the coolest greeting cards out there. As you might be able to guess from the name, when you open up the cards, a 3D design pops up.

And when Kenji and Lisa walked into the conference, they couldn’t miss the life-sized paper Lovepop tree, which was a cool moment.

Acuity was working with Lovepop when O’Leary invested in the company on Shark Tank, so to see a former client of ours grow and be highlighted as such a success was rewarding.

And while we didn’t know that Lovepop was going to be there, this was the reason we went to SuiteWorld. We were there because for a client like Lovepop, who grew so fast, they needed a more sophisticated accounting software than we could offer them at the time.

So, we became a NetSuite partner for this reason.

The program that we became a partner in is the NetSuite BPO – Business Process Outsourcing. What we’re seeing is there are good opportunities for startups that received their first large round of funding to go straight to NetSuite.

In the past, some companies might have thought it’s too early to use NetSuite’s software. Or that NetSuite is too big for them.

Yet, Oracle NetSuite EVP Evan Goldberg said that more than 150 of their users have gone public in 2021, and 65% of technology-based initial public offerings are using NetSuite’s accounting platform.

The BPO program allows us to put an early-stage startup tech company on NetSuite for an incomparable price. Now, Acuity can help startups get on NetSuite early, giving business owners the confidence that they’ll never have to make a transition to another accounting system, which is a huge undertaking.

With the NetSuite BPO program, we are striving to support the growth of companies like Lovepop for a longer period of time. And it was definitely a moment worth noting to see that reason represented in that life-sized paper tree.

The Venture Atlanta 2021 Presenting Companies — In One Sentence Each

AcuityCon 2021: Celebrating Our Growth In Gathering Together Again