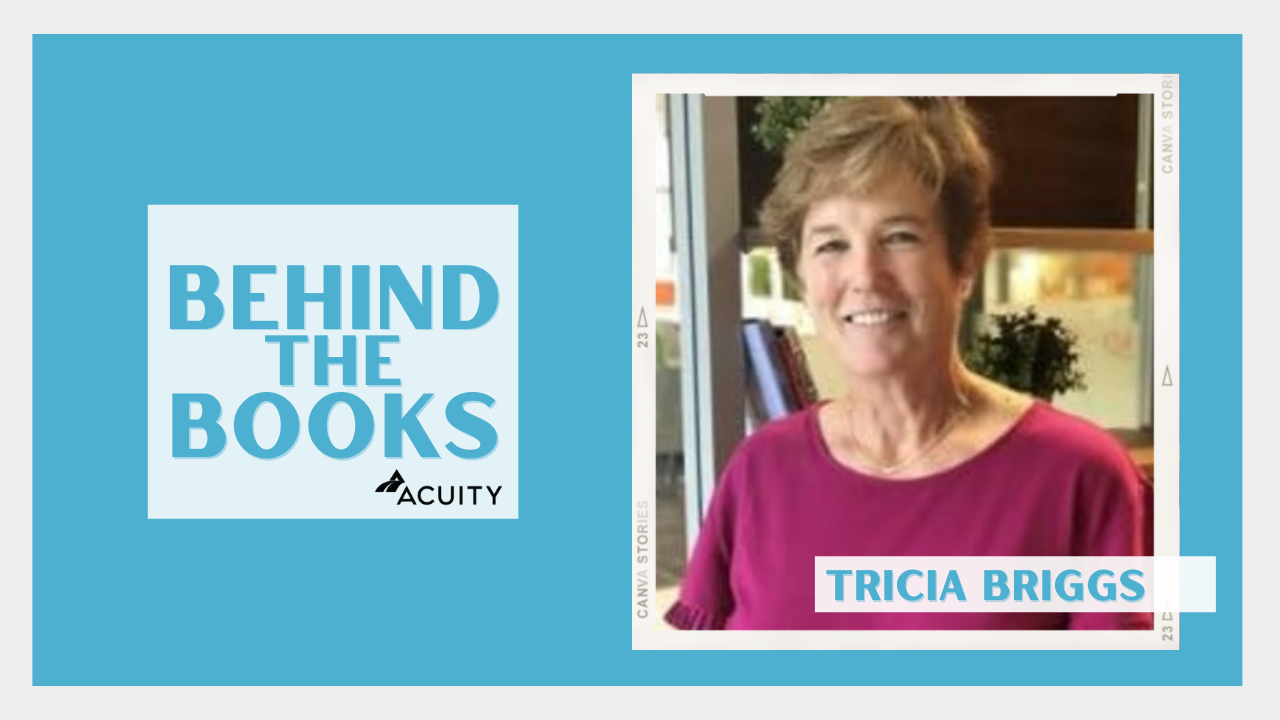 Behind the Books: Meet Tricia Briggs

Behind the Books: Meet Tricia Briggs

In this episode of Behind The Books, we’re introducing you to one of our most senior bookkeepers: Tricia Briggs. Tricia has been with us at Acuity since June of 2012 and is coming up on her eighth work anniversary.

If you prefer to watch the interview, skip to the bottom of this post for the full 10-minute video.

Tell us a little about yourself.

I’m a southern girl — I grew up in Florida in a little town called Lake City, went to college in North Carolina, and then came to Atlanta in 1985. So I guess you could say I consider myself an Atlanta girl as well!

How did you get into accounting and finance?

You know, my path was not a straight line. It was sort of an evolution, for I feel like I have finally found what I was really meant to do. In college, I majored in math, and I have always enjoyed the puzzle parts of math, figuring it out, and having the numbers balance. I actually worked with IBM in Atlanta for 13 years, supporting computer installations in the banking industry.

I left when I had young children to stay home with them, but after a while, I sort of had my own entrepreneurial spirit and created an internet company. While I was home with the girls, I learned a lot because I was sort of the website creator — along with the marketing arm, sales arm, and the accounting arm. I thoroughly enjoyed it, but after several years I sold it to my clients. Looking back on it, I realized that the part I enjoyed the most was the accounting part.

After that, I then worked for an architectural firm and for different companies in their accounting departments, learning and growing my skill base. Then, the opportunity came up at Acuity, which has just been wonderful. It’s just been perfect.

That’s very exciting that you had your own internet company. How long did you have it for?

About five years. So now, here I am helping entrepreneurs with that creative mind and who want to go out on a limb and start a company — and I can understand the need for good numbers when it comes to that.

Who is your favorite client right now?

I am really enjoying working with the Caliber Capital Group. They just have a lot of exciting things happening in their real estate development company and are currently investing in developing car washes in a lot of the southern areas. The two owners are actually from Florida — not far from where I grew up so they have that “hometown feel” for me. It’s a lot of fun to work with them and see a project grow, from purchasing land to developing a building to converting that developed building into an operating entity. It’s a really neat progression.

You have multiple Caliber entities, so how many do you have right now?

On the carwash side, we have two that are operating currently but expect three more to come on in the first quarter, and by the end of this year, another seven. As another arm of their company, they also own several shopping center developments where they have rental space there. But most of the attention is on the new carwash development as it’s been growing by leaps and bounds. It’s been very fun to watch.

What does a normal day look like for you?

I usually start out, like a lot of people do, looking at emails to see if there’s anything that needs to be addressed at that moment. With the bookkeeping arm, as you know, a lot of things are on a weekly basis. There’s sort of a Monday through Friday cadence that I work through. There might be some categorization of transactions on Monday. There’s attention to bills on Tuesday. Again it comes back on Wednesday with more categorization. Thursday paying bills…those types of things. So there are certain elements of each day that I tend to, but there are other things that always come up, like payroll, which always has a schedule of its own. And so you need to kind of work with that.

Who do you feel needs bookkeeping the most?

It’s those small businesses as they’re starting out [that need bookkeeping]. It’s just very difficult if you don’t know what your numbers are; if you don’t know where your money’s going. I know what it takes to wear all those hats and to still be out there developing the business and trying to keep tabs on it. A lot of small business owners, as they’re growing, initially think they can do the work. But once they hit their stride, I think accounting services are one of the first elements that they would probably need to expand.

Why is Acuity different from other places you have been in your career?

I spent the most time working at IBM, and that’s a large corporation with a lot of levels of management; a lot of bureaucracy. I have worked at some other small companies too, but Acuity is very much like a family. And there isn’t the bureaucracy, which makes it a lot more nimble. They’re willing to try new things and, and they’re very much family-oriented. Acuity listens to their employees, and it’s fun to see how things can move more quickly here.

What is something that people may not know about you?

I have two daughters who are both in their mid-20s now. My husband Scott and I have been in Atlanta for many, many years. I enjoy playing tennis and being outside.

But the other great thing I wanted to mention about Acuity that popped into my head is that Acuity has so many different options because of the growth that they’ve had. I asked one of our CFOs to join in and to provide some forecasting and some modeling and some budget. The different types of expertise are very helpful.

And then we’ve also been able to bring in — because they’ve been buying and selling properties — a controller in the middle tier to help with a lot of those purchases and sale entries. The great part is that Acuity has different skill sets to bring in whenever a client might need it, whether it’s in the moment or for a longer time period.

Enjoyed this episode of Behind the Books? Meet the rest of the Acuity team here.

Mary Margaret Stewart
Behind the Books
May 4, 2021

Sammy Siddique
Behind the Books
October 28, 2020

Behind the Books with Stephanie Barnett