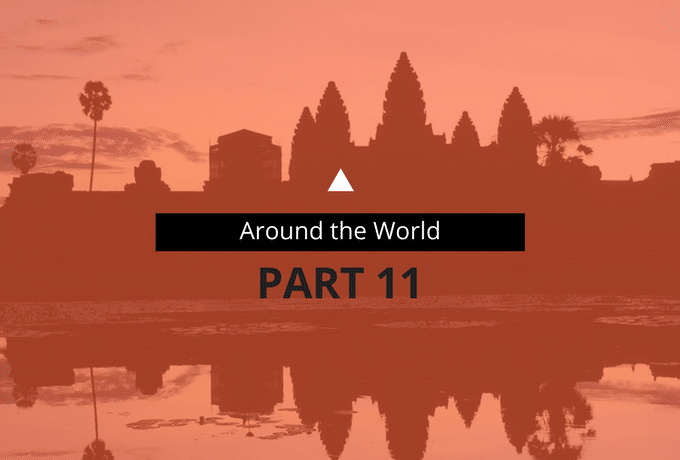 Around the World with Acuity: Part 11

Around the World with Acuity: Part 11

Our favorite world traveler’s journey around the world is coming to an end, but he isn’t slowing down just yet. Since we last checked in, David (AKA DMac), was just wrapping up his middle eastern adventures. Since then, he’s hopped through SIX new countries, wrapping up 2016 with an epic fireworks display in Singapore.

Tell us about your experiences in Malaysia… anything like Zoolander?

Ha – I spent my time in Kuala Lumpur, the capital city of Malaysia, known for the immense Petronas Twin Towers (photo below). They dominate the city’s skyline and their beauty can only be fully appreciated when illuminated at night. Kuala Lumpur is also known for its street food, of which I took full advantage. Now, eating street food in foreign lands of questionable sanitary practice is never wise; but it was actually only when I ate in a “normal’ Malaysian restaurant that I experienced any kind of… unrest.

Oh boy, that’s always fun. Where did you go from there, world traveler?

Next, I made my way to Bali, an Indonesian island known for its world class surfing. I haven’t been on a board in ages and was delighted to be able to surf again. Unfortunately, I broke my toe; but that didn’t stop me! I also tried Kopi Luwak coffee – an extravagantly priced specialty in Bali where the coffee beans have been eaten, digested, and… released by a Civet (a cute furry animal) before being roasted and ground into coffee. The taste and aroma was unusual, to say the least.

A broken toe and digested coffee beans? How can you top that?
Well, my time in Bangkok was pretty epic as well. What can you say about the infamous city of sin in a G rated blog? Only that the city lived up to its well deserved reputation! It is definitely not for the faint of heart. On a totally separate note, the King of Thailand had passed away the month before, so the country was still in mourning. The tributes to their beloved King were heartfelt. People came from all over the country to pay their last respects – that was really special to witness.

What happens in Thailand stays in Thailand. We get it. What was next?
After Bangkok, I ventured to Hanoi, the capital of Vietnam. The signs of America’s war with Vietnam have mostly been erased during the last 40 years; but visiting the museum’s was a chilling reminder. Seeing their perspective on the war was eye-opening. The most striking event I witnessed was when a small Vietnamese school boy gave an impromptu peace sign while standing in front of a display of 500 pound bombs that America had dropped on Vietnam.

Wow, that must have an emotional moment.
It was – for sure. From there, I flew to Cambodia to visit Angkor Wat, the largest religious monument in the world. It was originally a Hindu temple that was gradually transformed into a Buddhist temple. It is much larger than I ever could have imagined.

Travel Tip: Head to Angkor Wat at sunrise – the sun rises behind the temple and creates an amazing reflection on the front pools.

And where did you go next?
Thailand and Singapore were my last stops on this leg of the trip. Phuket, Thailand is a resort area known for its white sand beaches and crystal clear water, a welcomed retreat after all of my hectic travels. It was a great place to unwind and get a tan over the Christmas holidays. Then I made my way to Singapore, a modern city/country and global hub for commerce and finance. Their New Year’s Eve fireworks show is world famous and I enjoyed it immensely.

Fun Fact: Singapore is an island nation, both a city and a country.

Have big dreams to work and travel around the world? Follow along with our Around the World Series for world traveler insights and inspiration!