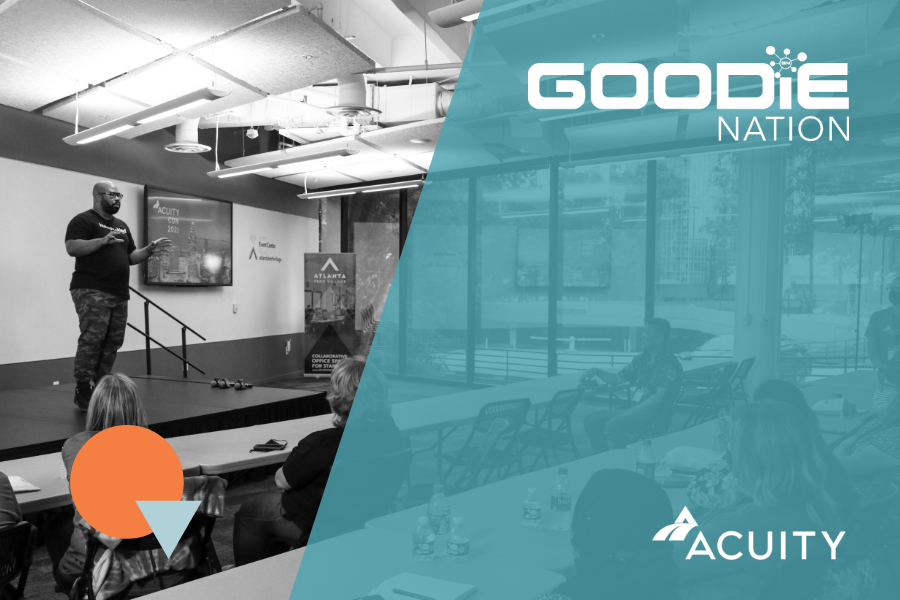 By Mary Margaret StewartOctober 27, 2021 No Comments

Founder of Goodie Nation Joey Womack was kind enough to keynote AcuityCon this year as our latest AcuityCares client. Here are 5 takeaways that we think you should know.

1. His goal is to positively influence 1 billion people by 2039.

Joey Womack is doing big things. Not just in Atlanta, and not just in the Southeast, but across the country. Maybe it’s because he’s got his mind set on one of the boldest goals we’ve ever heard.

If anyone can do it, we believe that he’s the guy to do it.

2. He’s big on origin stories. And he wants you to know his.

Joey was born in 1979 in Alabama, and he grew up in a family with a rich tradition of social impact. His parents were paving the way for him to accomplish big things.

“The first job my mom wanted was to be a geneticist. It’s interesting because you talk about black women – Montgomery, Alabama, late 60s, early 70s – like, how did she even figure this out? But ironically, that was the first thing I ever wanted to be as well,” he said.

Today, he calls his mom a “human Facebook” – she knows just about everyone.

“My father is from the area of Mobile, Alabama, called Africatown, which is where the last slaves that came to this country eventually settled. He ended up getting a scholarship to a small black college in Virginia and majored in business. He went on to be an accountant.”

His dad’s love for numbers and his mom’s ability to connect with people had a great impact on Joey’s life trajectory in more ways than he could have imagined. The influence of both of his parents helped build an early foundation for social change, a drive he would discover in college.

Joey went on to major in accounting, following in his dad’s footsteps. In 1999, he got his first internship in New York, and he made friends with students of color at Columbia and NYU. He was inspired to develop a website to connect black students at HBCUs and non-HBCUs.

After completing another internship – this time with Ford’s auditing division in Detroit – he decided to launch his first tech startup. After seeing close to 30,000 people across Detroit join a Yahoo Group for information about events, he wanted to bring it back to his college campus to connect even more people.

And as a self proclaimed “rebel with a cause,” he decided to pilot the idea himself, with a good amount of success.

Fast forward six months to March of 2002. Joey was leaving his last class of the day, and his heart was telling him, “Do it.” “It” was to launch the website that he’d thought of half a year earlier. So, he went home to write his first business plan for his first startup company. It went on to be in the top five in the country.

After building his startup company, he moved to Atlanta and began to develop a community for entrepreneurs and people in social impact. And therein lies the birth of Goodie Nation.

3. Goodie Nation went from one man’s vision for change to a 300-founder threshold spanning across the globe. And here’s how Joey did it.

After moving to Atlanta, Joey planned a “Hack-A-Thon For Good” for Atlanta Startup Week. The idea was for developers and marketers to come together to help solve challenges for various nonprofits.

Later on, Goodie Nation received a $10,000 grant from Google to launch a social impact pre-accelerator, helping entrepreneurs go from idea to pilot.

The first cohort, fall 2016, focused on gentrification economic inclusion. (And their first event was actually held in the very room that Joey got up on stage for at Atlanta Tech Village for AcuityCon!) The group included Jasmine Crowe from Goodr, Jenn Graham from Inclusivv, and India Hayes from Mini City.

Fast forward to summer 2019, and Joey shaped Goodie Nation into what it is today with a program called “Intentionally Good.” It focuses on closing the relationship gap for social entrepreneurs and diverse founders.

They just crossed the 300-founder threshold, and they span across the globe. In addition, they just announced their second round with Google for Startups Black Founders Fund.

4. He has three ways you can help Goodie Nation’s efforts, not just as companies, but as individuals.

The first is time commitment.

This could be by doing things like giving advice or setting up introductions to people in your network.

The second is giving your talent.

You can start by connecting with Goodie Nation’s founders. Go to https://goodienation.org and sign up to be an expert.

The third is via monetary support.

Goodie Nation doesn’t believe in charging entrepreneurs for their help, and they also do not take equity. They raise money in more of the traditional ways for nonprofits, so new sponsors and donors are always welcomed.

Joey started off his AcuityCon session with a quick shoutout to his Spotify account, where he said he has “the world’s best playlist” called If I Was A Deejay. Check it out here!

AcuityCares is Acuity’s charitable giving initiative that we started to provide free services to nonprofits that are making a tremendous impact on our community.

If you know a deserving charity, you can learn more about AcuityCares and nominate worthy organizations on our website.

Goodie Nation exists to eliminate the relationship gap that stands in the way of success for too many promising entrepreneurs, especially those who are people of color, women, or aren’t located in coastal financial centers. Goodie is a 501(c)(3) charitable organization and contributions are tax-deductible for income, gift, and estate taxes.